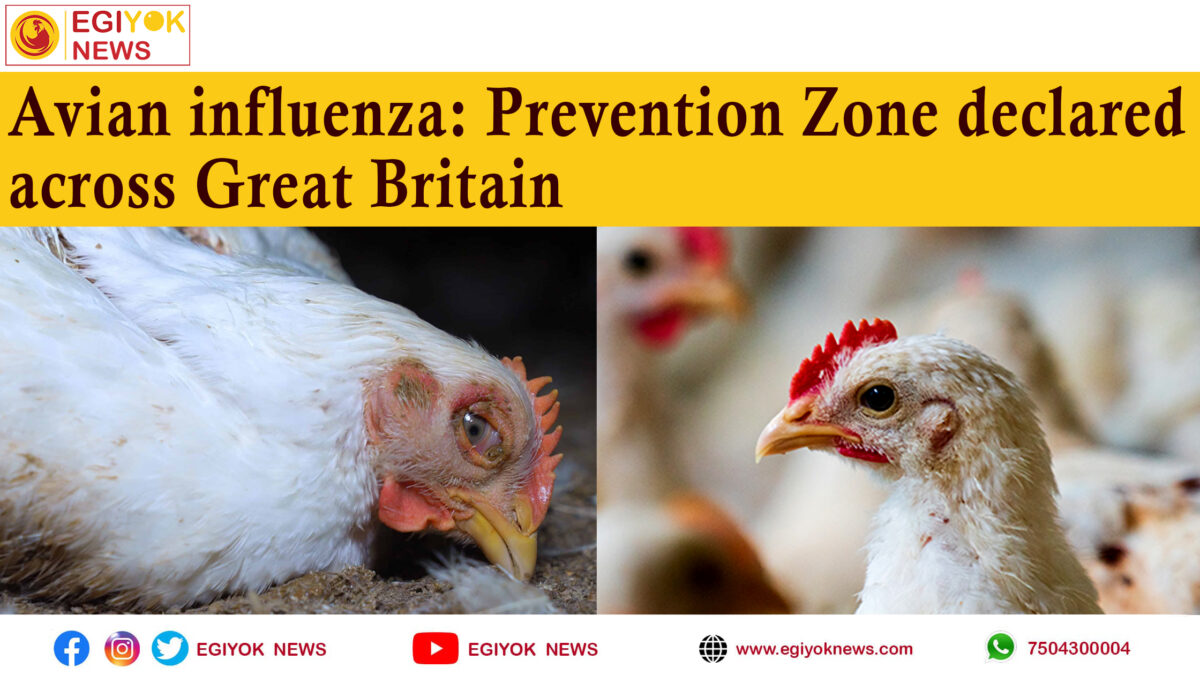 Following an increase in the number of detections of avian influenza (bird flu) in wild birds and on commercial premises, the Chief Veterinary Officers from England, Scotland, and Wales have declared an Avian Influenza Prevention Zone (AIPZ) across Great Britain to mitigate the risk of the disease spreading amongst poultry and captive birds.

From midday on 17 October, it is a legal requirement for all bird keepers in Great Britain to follow strict biosecurity measures to help protect their flocks from the threat of avian flu.

Implementing the highest levels of biosecurity measures on farms is the most effective way to reduce the risk of disease spreading within flocks. The introduction of the AIPZ comes after the United Kingdom faced its largest-ever outbreak of avian flu with 190 cases confirmed across the United Kingdom since late October 2021, with over 30 of these confirmed since the beginning of the month. The East of England has been particularly badly hit with outbreaks in poultry and captive birds. There have also been outbreaks in the southwest and in wild birds at multiple sites across Great Britain.

Avian influenza circulates naturally in wild birds and when they migrate to the United Kingdom from mainland Europe over the winter they can spread the disease to poultry and other captive birds. Maintaining strict biosecurity is the most effective method of protecting birds from the virus.

The UK Health Security Agency (UKHSA) advises that the risk to public health from the virus is very low and the Food Standards Agency advises that avian influenzas pose a very low food safety risk for consumers. Properly cooked poultry and poultry products, including eggs, are safe to eat.

In a joint statement the Chief Veterinary Officers for England, Scotland, and Wales said: “Bird keepers have faced the largest ever outbreak of avian flu this year, and winter brings an even more increased risk to flocks as migratory birds return to the United Kingdom.

“Scrupulous biosecurity and hygiene measures are the best form of defense, which is why we have declared an Avian Influenza Prevention Zone (AIPZ) across Great Britain, meaning that all bird keepers must take action to help prevent the disease spreading to more poultry and other domestic birds.

“The introduction of an AIPZ means regardless of whether you keep a few birds or thousands, you are legally required to meet enhanced biosecurity requirements to protect your birds from this highly infectious disease.”

The introduction of an AIPZ follows a decision to raise the risk level for avian influenza incursion in wild Birds in Great Britain from ‘medium’ to ‘high’. For poultry and captive birds the risk level has been raised from ‘medium’ to ‘high’ at premises where biosecurity is below the required standards, and from ‘low’ to ‘medium’ where stringent biosecurity measures are applied.

The nationwide AIPZ builds on the additional biosecurity measures that were brought in last week as part of the regional housing order which covers Norfolk, Suffolk, and parts of Essex. The AIPZ, now in force across Great Britain, does not include a nationwide requirement to house birds. However, this is being kept under constant review.

There has been a prolonged season of avian influenza this year and with the now increased risk during the winter, the need to include a mandatory housing requirement in the AIPZ may arise. Further disease control measures will be based on the latest scientific evidence and veterinary advice..….click here to read the full news

Beware of Bird Flu in Winter Season in India