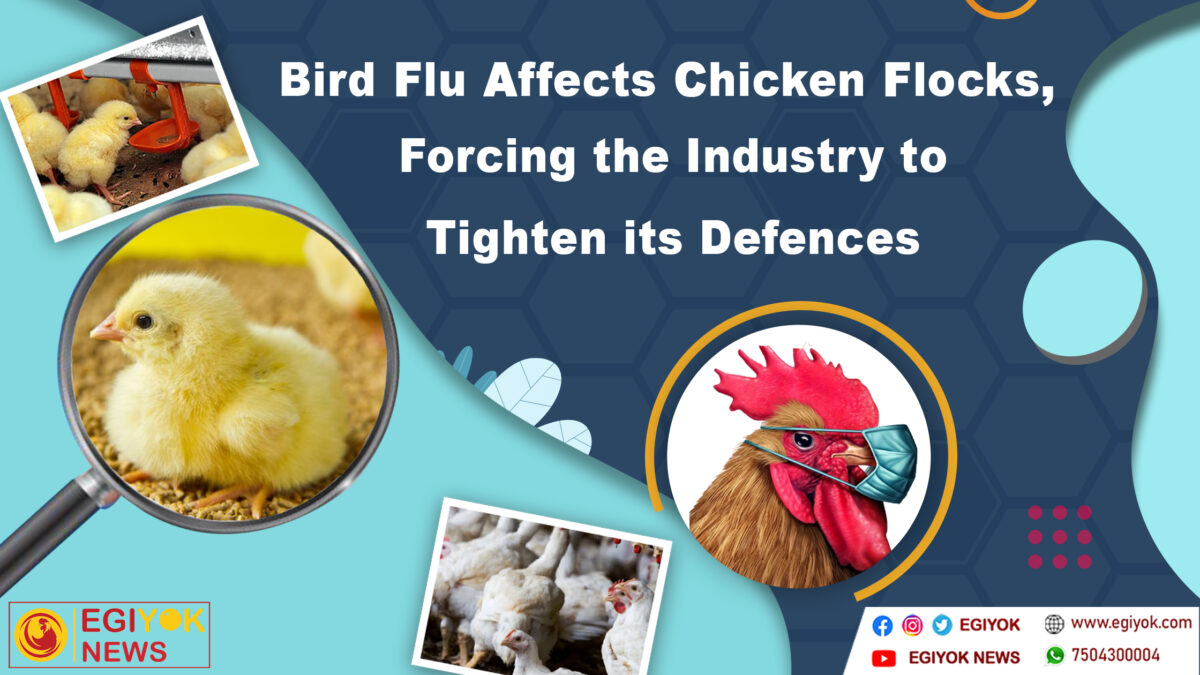 On Monday the US department of agriculture said that there is an outbreak of bird flu in the U.S flocks which is a deadly one, and it is putting the U.S poultry industry on high alert for more widespread outbreaks.

In Fulton County a commercial chicken farm outbreaks highly pathogenic avian influenza in a group of about 2,40,000 birds. World’s largest U.S chicken processor (by sales) confirmed that the farm housed the company’s chickens.

In Fauquier County, Va a separate outbreak in a backyard flock of birds was confirmed. The infected birds will be destroyed to prevent the further spread of the disease said, state officials. Also, the affected areas are sealed by state officials. Surveilling and testing activities are also conducted by the federal and state authorities around the area of affected groups of birds.

Because of this, there is a ban on the entry of affected birds into the food supply. A recent avian-influenza outbreak has not posed a health risk to humans, federal officials said.

This outbreak can pose a threatening environment in all the poultry companies such as Tyson, Sanderson Farms, and Pilgrim’s Pride Corp. Meat companies are already raising the prices due to the shortage of cite workers that have left them unable to meet customer demand as well as higher transportation and feed costs.

Tyson with state and federal officials working for the prevention of the spread of the virus, a spokesman said, the company doesn’t expect the affected farm in Kentucky to affect its overall chicken production levels. Last week on Tyson food company’s quarterly earnings call with the analysts Tyson food said that on the East Coast the Arkansas-based company has increased biosecurity protections facilities, also reduced the overall number of trips to farms, and also took extra time to clean vehicles.

“We implement very robust biosecurity measures across all our facilities, and those measures include testing every flock for avian influenza,” David Bray group president of poultry for Tyson, said on the call.

In recent weeks there has been reported multiple cases of bird flu across North America, which has led poultry companies to undertake preventative actions. The USDA said that in commercial and backyard flocks of three states avian influenza has been confirmed.

Since the outbreak of the disease in 2015 which led to the deaths of more than 50 million chickens and turkeys, the US poultry industry has remained unaffected by this on a very large scale. Since then only an investment by all the chickens, turkey, and egg processors was made in new biosecurity measures and other precautions to prevent the spread of diseases.

Perdue farms spokesperson said that none of their flocks has been affected by the recent outbreaks, but they are still concerned because of the number of positive cases.

Approximately 3% of shares of Tyson closed down Monday. Stocks of Sanderson Farms and egg giant Cal-Maine Foods Inc. fell about 1% each, while Pilgrim’s Pride declined 0.5%. Stock markets declined less than 1%.

It’s unlikely the outbreak of bird flu will have an immediate impact on poultry companies’ sales because many poultry-importing countries may choose to continue buying U.S. poultry products from states where it hasn’t been detected, said Christine McCracken, executive director of meat research at Rabobank. If viruses are detected in poultry-producing states such as Arkansas, the impact on exports could be greater, she said.

Besides traditional biosecurity measures, Ms. McCracken said there is not much control over the spread since it is being carried by wild birds. There might be more cases to come as the season progresses.”

In addition, shortages of workers on farms may increase the risk of disease spread, she said. A smaller pool of chicken producers is responsible for cleaning more farms, and it’s unclear whether the newer workers are as effective with certain hygiene practices, she said.