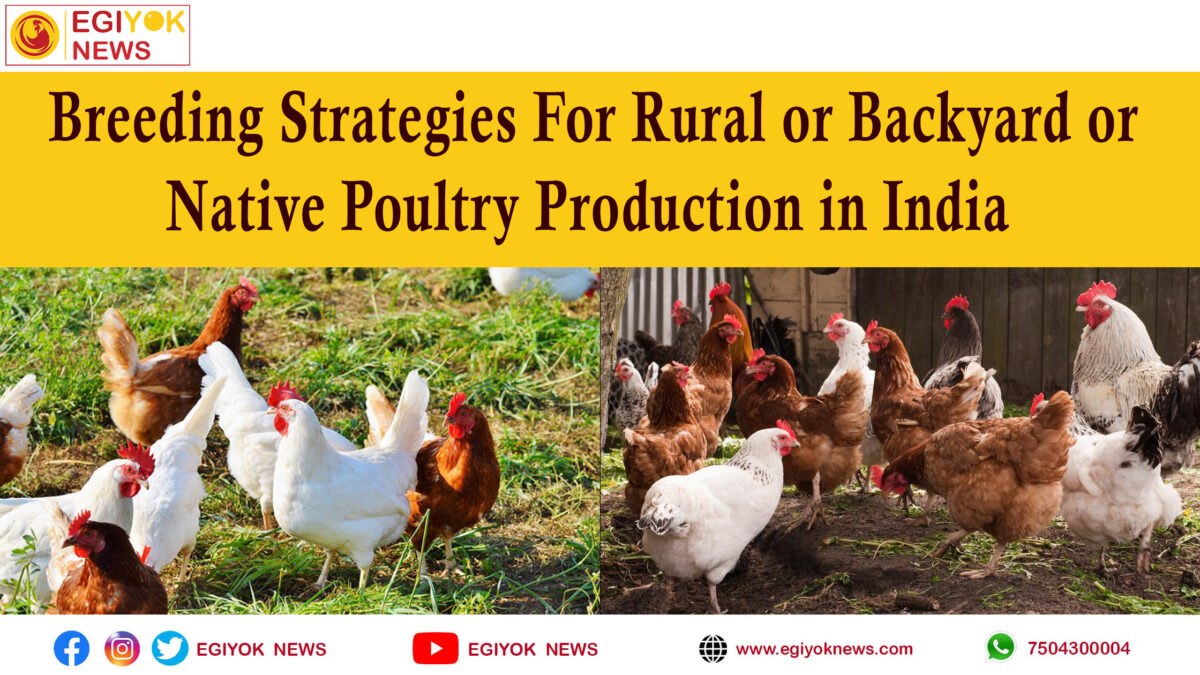 The rural population living in India constitutes 72.2 percent of the total population, which is predominantly occupied by poor, marginal farmers and landless laborers. Backyard poultry farming is an old-age profession of rural families in India. It is the most important source of subsidiary income for landless and poor farmers. It is an enterprise with low initial investment but higher economic returns and can easily be managed by women, children, and old-aged persons of the households. Nowadays, poultry meat and eggs have been the best and cheapest source for meeting the per capita requirement of protein and energy for rural areas of India. Though India has shown tremendous growth in poultry production over decades rural poultry farming is still lagging behind and always found to be neglected. As it is the best alternative for the small scale farmers to subsidize the income with low input, this system needs an upliftment with the recent advancement of research in the field of rearing of chicks, balanced feeding, disease control, and efficient marketing system for the eggs and meat. Nowadays, backyard poultry farming can be easily started with good egg-laying breeds of RIR (Rhode Island Red), Chabro, Punjab Red, and Partapdhan. Backyard poultry production system is a low-input business and is characterized by an indigenous night shelter system, scavenging system, natural hatching of chicks, poor productivity of birds, with little supplementary feeding, local marketing, and no health care practice. Poultry development plays a crucial role in increasing egg and chicken meat production. The production of agricultural crops has been rising @ 1.5–2% per annum, whereas eggs and broilers have been shown to rise @ 8-10% per annum but the growth has been mainly restricted to commercial poultry. In India, growth in the livestock sector can definitely contribute to poverty reduction, because people living in rural areas mostly depend on livestock for their daily livelihoods. It has also been reported that the demand for animal protein sources is increasing rapidly in developing countries. Raising of local poultry birds in the backyard is an important source of livelihood for rural people. Smallholdings containing 2-3 hens per unit were found to be a more efficient producer of eggs compared to those with 5 or more hens per unit. The main interest of the poultry farmers having backyard poultry is not the production of eggs as returns are very low from the sale of eggs. They hatch all their eggs and sell them as birds because of the broodiness habit of these breeds.

Poultry has been one of the finest components of the animal husbandry sector substantially contributing to the national GDP and has been the backbone of the rural and tribal economy in the country. Backyard poultry farming contributes 12 % of the total egg production of the country. Further, the meat and egg of backyard poultry are more highly valued than that of industrially produced birds due to their comparatively superior taste and texture. By rearing improved breeds of chicken, we can increase the production potential of our birds in the backyard, both in terms of eggs/bird/annum and body weight gain per day. It is a need for a systematic study to characterize all the native breeds to find out their uniqueness among them so that those traits can be exploited to design breeding and conservation strategies.

The chicken was the first poultry species to be domesticated, which happened in 5400 BC in China. In India, archaeological discoveries point out that chicken had been domesticated by 5400 BC. But it is not known whether these birds made many contributions to modem domestic fowl. Chickens from the Harappan Culture of the Indus Valley (2500-2100 B.C.) may have been the main source for diffusion through the world (Crawford, 1990a and b) [1, 2]. Birds were first domesticated for cultural and entertainment purposes, until much later birds were utilized as a source of human food (Crawford, 1990b) [2] . From there they gradually spread to the east and to the west from there they eventually encircled the globe. Two scientific names are in use for chicken, namely Gallus gallus and Gallus domesticus. The first implies that chickens were domesticated exclusively from the Red jungle fowl (Gallus gallus) and the second that more than one of the wild jungle fowl species namely grey jungle fowl (Gallus sonnerati), Ceylon jungle fowl (Gallus lafayette) and green jungle fowl (Gallus varius) contributed to the evolution of domestic fowl. However, the red jungle fowl is the species that most closely resembles chicken so there is no doubt that it was the main ancestor, although it may not have been the only one Collias and Collias (1996) [3]. It is a need for a systematic study to characterize all the native breeds to find out their uniqueness among them so that those traits can be exploited to design breeding and conservation strategies. All native chickens are low productive in nature, hence the improvement of native chickens through selective breeding is required for enhancing the productivity of the backyard and free-range systems of production. All native chicken breeds need to be identified, demarcated, and notified so that improved varieties can be propagated in non-notified areas for improving the productivity of backyard farming. Genetic improvement of native chicken breeds and reintroduction could be used to increase the productivity of backyard/free-range farming without increasing the production cost or loss of biodiversity (Magothy et al. 2012) [4]. Therefore, characterization and improvement in the performance of native chickens through selective breeding for growth or production is the need of the hour to enhance the productivity of low-input backyard poultry farming in a sustainable manner.

There are many advantages of the rural poultry farming system which are given as follows:

Ø Gives employment to the rural small-scale and marginal farmers.

Ø Aids in enhancing the soil fertility in backyards (15 chickens produce 1-1.2 kg of manure/day).

Ø Products from rural poultry farming fetch high prices as compared to those from intensive poultry farming. Almost double the rates of brown-shelled eggs in the local market.

Ø Provides eggs and meat with low investment through backyard poultry farming in a free-range system.

Ø Birds reared under free-range conditions give eggs and meat of low cholesterol concentration compared to those produced under intensive poultry farming.

z Can be easily adapted even by resource-poor facilities with very low investment.

z Even illiterates can adopt it as it requires much less skill.

z Can be sustained entirely of free range

z They help to improve the nutritional status of the rural poor.

The utilization of improved native breeds or crosses with high-producing colored breeds has been found to result in a suitable bird for the traditional backyard system. Pure breeding methods like mass selection, family selection, within-family selection, index selection, and their variants are adopted after assessing and apportioning the variance. Crossbreeding is adopted at different levels where dominance contributes to the variance mostly. Newer options for quicker, more precise, and using specific poultry breeding programs are presented by a newer understanding of molecular genetics and the unraveling of the chicken genome. Integration of new knowledge, such as MAS and QTL, into current breeding programs, is crucial. Breeding of native chicken needs to be viewed as operating by three different methods

This can be achieved by an exchange program of cockerels. Cockerels of improved breeds were distributed to the rural farmer. The response from the rural poor is growing even though the market acceptability for crossbred multicolored strains has been comparatively lower than for purebred native chicken

The selection strategy for native chicken should serve two purposes:

1. Improvement of economic parameters like body weight, egg number, fertility, etc., so that the rural farmer gets maximum return out of his small-sized backyard chicken units

DEVELOPMENT OF STOCKS FOR RURAL POULTRY

Since independent efforts in our country were made to produce dual-purpose breeds and hybrids with improved production profiles. The exchanges of hatching eggs and the introduction of exotic cockerels were adopted.

z There is a need for creating awareness, providing knowledge, and proper planning and implementation of strategies for backyard poultry farming for poverty alleviation in rural India.

z There should be a coordination research program that addresses the problems of breeding, feeding, housing, and disease control in backyard poultry farming.

z The importance of native breeds of poultry birds for the rural economy in developing and underdeveloped countries is mostly very high.

z One of the most important positive characteristics of native chickens is their hardiness, which is the ability to tolerate harsh environmental conditions and poor husbandry practices.

z The low production performance of native breeds of chickens may be improved through selection and crossbreeding.

Ø Local poultry breeds exhibit superior adaptability in their habitat and possess the ability to survive, produce and reproduce on a low level of nutrition and sub-optimal management.

Ø The inputs required are very small, as they scavenge their feed requirements and are raised with little veterinary care.

Ø They possess the ability to protect themselves from predators.

Ø All the local breeds show broodiness and hatch their own chicks.

Ø People prefer eggs and meat of indigenous poultry compared to those realized from farm-breed chickens consequently eggs and meat from local breeds are sold at a premium price.

Ø Cock fighting is a popular sport for the ethnic tribes and the local breeds are superior to exotic breeds in fighting. Ø Use of colored bird for socio-religious.….click here to read the full news

Feeding solutions for the 21st century