Dispelling fallacies about hormones and steroids in poultry farming 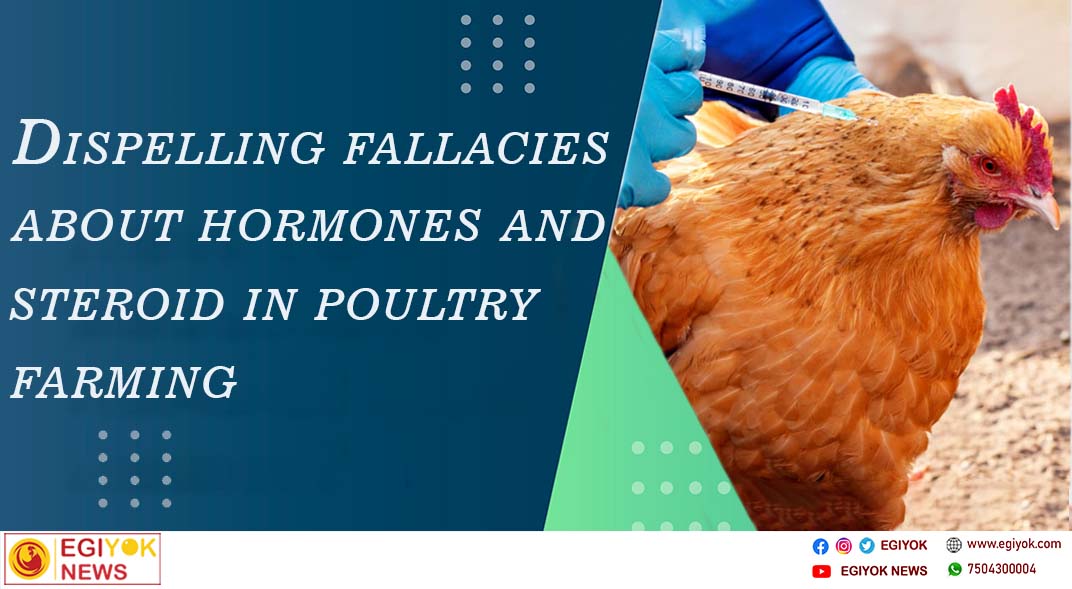 The Indian poultry sector is now facing a misinformation campaign over the use of hormones and steroids in the production of chickens. This has resulted in decreasing chicken sales due to concerns about obesity, early puberty, and antibiotic resistance as a result of eating the injected birds. Social media has been used to disseminate the panic.

As part of this booming sector, we at EGIYOK would like to address some of the current unwarranted worries and misunderstandings about chicken breeding. The following are some of the most frequent myths:

Antibiotics are only administered to birds for medical reasons, and they are usually recommended by certified veterinary doctors who are members of the medical council. Hormone injections are not used since the cost of hormones is substantially more than the cost of the birds, and hence will not benefit chicken producers. In addition, administering steroids

The debate over broiler chickens reaching full size in 40 days has sparked considerable discussion. This has been made feasible by improved breeding of birds with the best characteristics, which has been supported by diet formulas rather than genetic alterations. Because of improved and more effective procedures evolved over time, birds are now developing at a quicker rate.

In other words, there’s no need to be concerned that eating broiler chicken would lead to obesity or early puberty. Chicken is highly healthy food in and of itself, as it is abundant in protein, vitamins, and minerals and has very little carbohydrate.

Furthermore, all FDA-approved steroid implant products come with a zero-day withdrawal period. This signifies that the animal’s flesh is safe to eat at any time after the animal has been treated. Some of the authorised medications, such as estradiol (estrogens), progesterone, and testosterone, are generated naturally in humans and animals throughout their lives. Eating food from animals treated with these medications poses no risk to humans. This is because the quantity of extra hormones generated as a result of pharmacological treatment is negligible in comparison to the amount of natural hormones contained in the flesh of untreated animals and produced naturally in the human body.