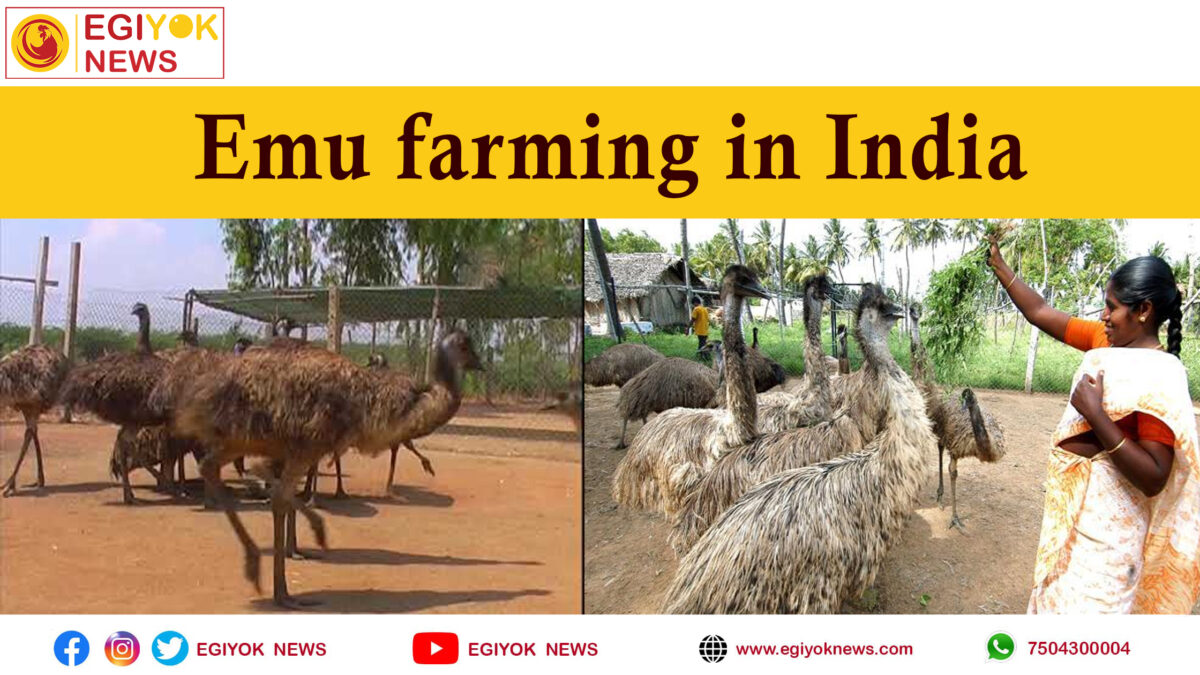 Emu belongs to the Ratite family of birds. It is the third biggest bird species after Ostrich and Cassowary. They originated from Australia. Emu is a social bird with a dark whitish complexion. The birds live in groups and can thrive under varying climatic conditions ranging from 0 degrees C. to 52 degrees C. These Birds are Omnivorous and eat leaves, vegetables, fruits, insects, and worms. They can be fed Modified poultry feed. Emu is the second largest flightless bird under the group ratites. It is scientifically classified as Dromius noveahollandiae along with other members of the group ostrich, kiwi, rhea, and other flightless birds. Emu farming will be a booming agri-business due to their benevolent donations to the human race viz. pain relieving oil, red healthy meat, soft, supple leather, and gorgeous feathers. Presently, the emu is native to Australia and its farming is spread all over the world including the U.S.A, China, and Australian Asian countries. Emu is becoming popular for having 98% fat-free red meat and other utilities obtained by-products namely; emu oil, skin, feathers, and ornamental eggs and toes.

A year-old EMU is five to six feet in height and weighs 30-40 Kg upon completing 18-10 months EMU weighs in the range of 50-60 kg. During its growth, it changes its color thrice. On a newborn up to 3 months, there will be stripes on its body, after 4 months it starts looking chocolate brown. After 1 year it again starts changing its color, the feather on the neck goes away and the neck looks greenish blue the feathers exhibit a variety of colors but mostly in brown and black shades.

There is no visible distinction between a male and a female EMU. Usually 18-month-old female is capable of reproduction; however, in some EMU this period may extend up to 20 to 24 months too. As per available national data on average during the breeding period, a female EMU lays up to 32 eggs. The breeding period is 6 months, from October to March.

EMU eggs are dark green in color. Compared to the eggs of a hen they are 10-12 times bigger. Female EMU may lay eggs after every 3 to 5 days.

EMU has a long life and lives at least 30 and a maximum of up to 40 years. A properly managed EMU is capable of reproduction for at least 25 years. We can take it for granted that they produce 30 young ones per year. So in simple terms, if a farmer keeps these birds, and takes good care of birds, they will give him healthy financial returns in form of eggs & chickens for 25-27 years of age. After it stops’ reproducing it is a minimum of 50 Kg bird to sell for various products like meat, oil & skin and still make money for the farmer. Emu chicks when hatch out have body stripes similar to squirrels later and grow after three months. Thereafter, they lose the stripes which turn into brownish-black feathers. An adult emu will be a large bird up to 6 feet in height with a long neck and small naked head and weighs 45 to 60 Kg. Legs are long and covered by scaly skin and three toes in the leg, the entire body is covered by long feathers while the neck it is absent.

Phenotypically emus look similar in both sexes. However, sex is done on day-old based on feather sexing, vent sexing by identifying male organs, and sound differentiation on maturity. Emu identification is usually done by painting different colors on the legs, leg strips, and microchipping. Moreover, male emu after getting maturity makes a grunting sound, whereas female makes a drumming sound.

EMU egg is the most important among various products in emu farms. In the initial period, the eggs should be used for the purpose of reproduction. In the later period, the eggs will be used for growing fleshy young ones. In emu farming, egg production & hatching remains very important everlasting process. In the future, EMU egg production will definitely fetch a large number of profits. These birds live for thirty to forty years and remain sexually active for at least twenty-five years. Hence with a single investment one can obtain long-term production & profit. A single bird gives a minimum of twenty and a maximum of forty eggs every year. These eggs have dark-green color. Each egg ways 400 to 600 gms.

Emu meat: Emu meat is 98% fat-free red meat, rich in protein, iron, vitamin B12, and vitamin C, hence it is an excellent diet for people suffering from heart ailments. The tenderness and texture of emu meat enable it to be fit for preparations, it is low in fat, loses moisture quickly, and is best under moist heat cooking. The emu meat contains less than 0.05% cholesterol. Due to the healthful benefits of emu meat, Americans recognized emu meat as a healthy alternative to beef.

Low on cholesterol, high on protein 97 to 98% fats free, what sounds like a well-rehearsed line designed to sell the benefits of consuming EMU meat. In India there are an estimated 1,000 EMU farms, 300 in Maharashtra itself are up and running today. While 1,000 may seem like a big number, it’s a drop in the ocean in comparison with the poultry farms that dot the country. Likewise in production, there are estimates about 33,000 Tons of EMU meat are being produced in India now, which is a fraction of the 1.9 million Tons of chic.….click here to read the full news