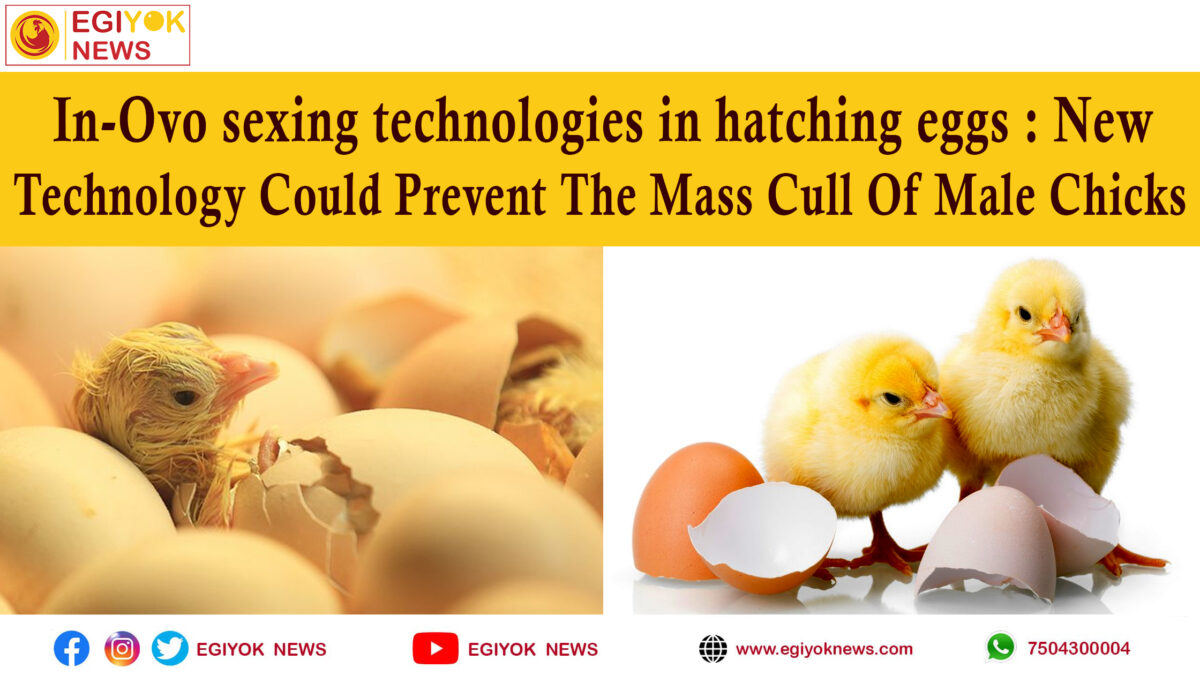 It is common practice in the layer industry to cull male day-old chicks directly after hatching. Male layers are unsuitable for egg production and too resource-inefficient for meat production. A staggering 6.5 billion chicks are killed worldwide every year. These are generally male chicks that are of no economic value. Ovo has developed technology that can quickly determine the sex of a chick, to ensure that only female chicks are hatched. The practice, however, does raise concerns about animal welfare. An increasing number of initiatives are working on a solution for this challenge by developing technologies to determine the gender of a chicken while still in the egg. The present-day ethical problem with egg production is chick culling of one-day-old male chicks, millions of male chicks are killed as part of the production process. On the day the chicks hatch from their eggs the chicks are sexed. During chick sexing the day-old chicks are divided into male and female groups. Female chicks can be raised to become egg-laying hens, or broilers fed to be slaughtered for meat, both for human consumption; after the sexing, these female chicks are transported to the rearing farms where they are housed before they go to a laying hen farm or broiler farm. On the other hand, the male chicks are deemed to have much less economic value, as they cannot lay eggs and are usually less suited for meat production; most male chicks are therefore called on the day they hatch after they have been sexed as male.

In the egg industry, the sex of day-old chicks is determined at the hatchery. Sexing chicks (determining whether they are a hen or a rooster) requires considerable skill and is done at this very early stage to determine their fate.

If strong and healthy, the female chicks are transferred to a site where they are grown to a suitable size and then moved to a laying facility — which could be a cage, free-range, or barn setup. Male chicks are considered an unwanted byproduct of egg production and are killed and disposed of shortly after chick sexing at just one day old.

Male chicks are killed for two reasons: they cannot lay eggs and they are not suitable for chicken-meat production. This is because layer hens — and therefore their chicks — are a different breed of poultry to chickens that are bred and raised for meat production. Layer hens are bred to produce eggs whereas meat chickens are bred to grow large breast muscles and legs.

Chick hatcheries breed one or the other type of chick depending on which poultry industry they supply — egg or meat. At the layer hen hatcheries supplying the egg industry with layer hens, the eggs are developed in industrial incubators. Once hatched, the newborn chicks pass down a production line to be sexed and sorted. Sick or weak female chicks and all male chicks are separated from the healthy female chicks and then killed.

Sex determination in the hatching egg

Before the chicks hatch, the sex determination procedures applied to the hatching egg (“in-ovo sex determination”) can be used to check at an early stage whether a female or male chick will hatch from the egg. While eggs in which female chicks develop are incubated further, the incubation of hatching eggs with male embryos is terminated. The eggs that have been discarded can then be used as feed, for instance.

The potential of in-ovo sexing

In-ovo gender determination has the potential to bring an end to the unnecessary killing of billions of male chicks. It is estimated that yearly around 7 billion day-old male chicks are killed. Implementing in-ovo sexing into the poultry industry results in more animal-friendly and more sustainable production. More animal friendly because the day-old male chicks no longer need to be culled, and more sustainable because less energy is used because only the female eggs need to be further incubated after sexing. The male eggs are sorted out and can be used for different purposes such as an alternative high-value protein source.

Solving this challenge has the potential to both address animal welfare concerns and increase sustainability by saving resources. Hatching birds is an energy-intensive process, so being able to identify the gender of a chick while it is still in the egg promotes both animal welfare and energy efficiency.

Our expectation is that as soon as a commercially viable solution becomes available, adoption will start. Germany is expected to be one of the first countries where the technology will be widely adopted. According to a recent court ruling, the use of the technology will become mandatory as soon as it is commercially viable. Once that point is reached, other countries in Northwestern Europe may follow. Our current expectation is that the North American market may be slightly later in adopting the technology, but this can change quickly when large retailers and food companies decide to demand its use from their suppliers. We also know that not all markets will accept in-ovo sexing technologies, as the development of life is still disrupted (despite the earlier stage). We already observe a vast growth in the market of growing male layer chicks for their meat. The organic market in Western Europe is expected to adopt fully the growth of the male layer chicks for their chicken meat.

In the last years, countries started taking legal action to ban male chick-culling. In January 2021, Germany was the first country to successfully outlaw the practice.[7] A few months later, France also banned the one-day-old male chick slaughter. In 2022, the third country, Italy, followed the same steps, prohibiting the practice by 2026.

The discussion has risen around who would be the next country to stop the cruel procedure. Since 2021 the U.S. has been urged to attend the activists’ lobbying that has been done for decades, but so far no progress has been made..….click here to read the full news