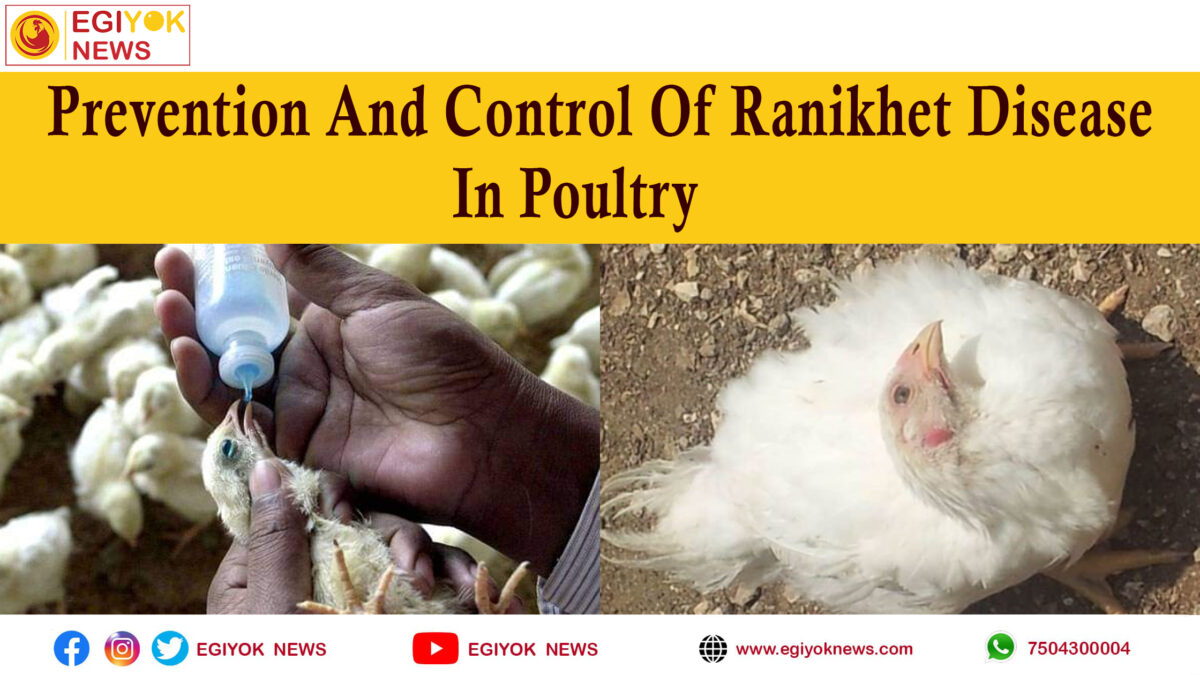 Ranikhet disease, also known as Newcastle disease is one of the most important viral diseases of poultry that affect a wide range of birds including chicken. Chickens are the most susceptible and it can cause heavy mortality at a very fast rate if care is not taken to vaccinate the birds. To control this disease, it is important that the farmer should learn how to vaccinate chickens against the disease and how to raise chickens in a way that is more likely to keep them healthy.

Newcastle disease is caused by avian paramyxovirus serotype type 1 (APMV-1), also called Newcastle disease viruses (NDV), of the genus Avulavirus belonging to the family Paramyxoviridae. APMV-1 strains are classified into five pathotypes based on their virulence in chickens, designated: a) viscerotropic velogenic, b) neurotropic velogenic, c) mesogenic, d) lentogenic or respiratory and e) asymptomatic. Lentogenic strains are the least virulent, mesogenic strains are moderately virulent and velogenic strains are the most virulent. Newcastle Disease also known as pseudo-fowl plague refers to all infections of poultry caused by avian paramyxovirus serotype 1 (APMV-1).

According to the World Bank, ND is ranked as the third most costly poultry disease, after Avian Influenza (AI) and Infectious Bronchitis (IB). At present, a total of 20 Avian paramyxovirus serotypes (APMV-1 to APMV-20) have been identified in different avian species. ND is caused by Avian orthoavulavirus1 (AOAV-1) formerly designated as Avian avulavirus 1 (AAvV-1) or APMV-1 under the genus Orthoavulavirus within the subfamily Avulavirinae of the family Paramyxoviridae. NDV strains have been broadly classified into two classes- class I and class II. Class I comprise of a single genotype 1 and is currently divided into 3 sub-genotypes: 1a, 1b, and 1c. Class I isolates are of low virulence and have been recovered from both domestic and wild birds. Whereas the Class II viruses are genetically more diverse and exhibit a wider range of virulence, and the complete analyses identified 21 distinct genotypes (I to XXI, excluding genotype XV, contains only recombinant sequences).

Since, its first report in 1926 on the island of Java, now part of Indonesia, and subsequently in 1927 in Newcastle-upon-Tyne in England, ND has caused tremendous economic losses to the poultry industry worldwide.

In India, ND was first reported by Edwards in 1928 in the Ranikhet region and is popularly called  Ranikhet disease owing to its place of emergence. As for time, it had been a century and the history of ND reflects four major well-established panzootic.

ND virus (NDV) has a wide host range affecting more than 240 species of birds but the disease varies considerably with different species. ND is directly transmitted by either inhalation or ingestion of the virus shed in feces and respiratory secretions of infected or carrier birds. Indirect transmission through transportation of live bird and poultry products, movement of people and equipment, contaminated feed and water, contaminated fomites, and vaccines may also occur. Moreover, spillover event from wild avian species into domestic poultry has also been reported. The incubation period for ND ranges from 2 to 15 days with an average of 5-6 days.

The disease varies from asymptomatic or mild infection to acute lethal infection with 100% mortality. NDV has been categorized into five pathotypes based on the clinical and pathologic manifestations in infected chickens, designated as follows:

Viscerotropic velogenic: It is the severe form of ND that causes hemorrhagic intestinal lesions and characteristic hemorrhages at the proventriculus-gizzard junction and in the caecal tonsils. It is also called an “Asian” or “exotic” form of ND.

Neurotropic velogenic: It causes neurological and some respiratory signs with no gastrointestinal involvement. The typical clinical manifestation includes tremors, ataxia, torticollis, and paralysis of wings and legs. Gross pathologic changes are not observed in the central nervous system.

Mesogenic: It causes mild to moderate respiratory illness and occasional neurologic. Other symptoms include depression, loss of weight, and decreased egg production. Mortality is around 10%.

Lentogenic or respiratory: These strains are usually associated with a mild or sub-clinical respiratory infection and a small drop in egg production. There is the absence of recognizable gross lesions and mortality is usually negligible.

Asymptomatic:  They cause only the replication of the virus in the intestinal tissue of the infected chicken resulting in subclinical enteric infection.

ND also has a zoonotic dimension since initial exposure to infectious material can induce transitory unilateral conjunctivitis with congestion, lacrimation, pain, and swelling of the sub-conjunctival tissues, which is usually self-limiting.

z All parts of the carcass

z Pigs, calves, humans, and turkeys can harbor and spread the virus as healthy carriers.

The rainy season in India has been found to be more favorable for the occurrence and spread of the disease. The neural form of the disease is more common in summer.

Clinical signs of the disease depend upon the immune status and age of the bird. The airways, gut, and nervous system tend to be infected.

z Swelling of tissues around the eyes and neck.

Gross lesions are usually seen in birds affected by velogenic strains of the virus. They have been characterized especially in chickens with viscerotropic strain, but they are not pathognomonic of the disease. Sometimes, birds with neurological signs or that died suddenly show few or no gross lesions.

Lesions caused by lentogenic pathotypes are usually limited to congestion and mucous exudates in the respiratory tract, with opacity and thickening of the air sacs..….click here to read the full news