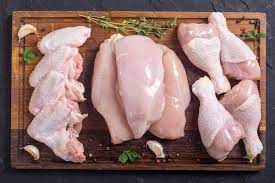 Ten years ago, the poultry muscle disease known as white striping was almost nonexistent. Now, the fat-boosting ailment shows up in 99% of U.S. store-brand chickens, according to a Humane League study to be released Monday.

The animal welfare nonprofit conducted an investigation in 29 states that found the affliction in virtually all grocery-store-brand chickens sampled. The illness is driven by the extreme conditions of factory farming, which turbocharges the raising process to a matter of weeks and puts undue physical stress on the animals, the Humane League said.

The disease’s name comes from its visible side effect: thin white stripes that appear on the meat’s surface. With the chickens unable to bear the weight of their own bodies, the disease causes the birds to replace some of their muscle tissue with fat.

SAFETY AND QUALITY OF POULTRY & GOAT MEAT IN INDIA